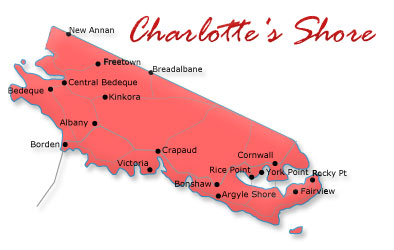 As visitors to Prince Edward Island arrive at the crest of the 13-kilometre Confederation Bridge, 60 metres above Northumberland Strait, they are presented with a marvellous vista of the Island. Charlotte's Shore is a region of rolling hills and redcliffs, and is in many ways the economic and political centre PEI.

At the Visitor Information Centre in Gateway Village, located at the foot of the Confederation Bridge, the Our Island Home exhibit is an imaginative introduction to our industries, arts and culture. Gateway Village also contains a selection of more than 20 shops, restaurants and snack bars. If you have ever wondered what you would look like with red braids la Anne of Green Gables, stop in at Cavendish Figurines and find out!

Midway between the Confederation Bridge and Charlottetown lies a quiet village that seems almost untouched by modern development. However, a stroll along the tree-lined streets of Victoria-by-the-Sea will reveal craft shops, galleries, cafes, a theatre and even a chocolate factory! A park and seafood market suggest a nice picnic option, or sign up for a kayak tour.

To get a first-rate view of the Confederation Bridge from the shore, drive up to the St. Peter's Roman Catholic Church in North Carleton and get a shot of one of the world's longest bridges. Then have your picnic lunch at Chelton Beach Provincial Park. Keep your eyes peeled for local horsemen jogging their standardbreds as they get ready for the races. The Charlottetown Driving Park has a busy harness racing schedule. This year they host the World Driving Championship.

Charlottetown celebrates its status as The Birthplace of Canada in many fun ways. At Founders' Hall on the waterfront, visitors to the multimedia exhibit centre are transported through Canada's history, from the moment of conception at the Charlottetown Conference to the Canada of today. Province House National Historic Site has preserved the chamber where the discussions were held in the fall of 1864, and celebrations around Canada Day and Labour Day pay tribute to Canada's Founding Fathers. Why not pick up a Heritage Passport which includes admission to the sites, a tour and lunch?

Charlottetown is also a very lively cultural centre where theatre productions range all the way from the professional musicals performed at the Confederation Centre's 1000-seat theatre, to local dinner theatre and improv-style entertainment. And music begins on the street corners and extends all the way to the nightclubs, pubs and stages covering the gamut from Celtic to jazz. Shopping in Charlotte's Shore also provides marvellous entertainment as the region is home to many excellent galleries, specialty shops and even product tours for those who want the full story.