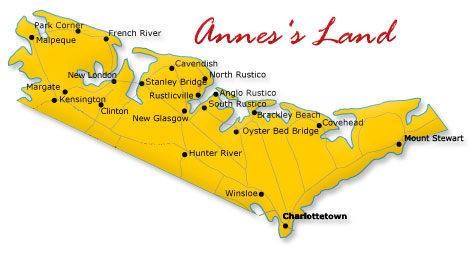 The central north-shore region of Prince Edward Island is an area filled to the brim with places to go and things to do. It is also a region of great contrast, offering both quiet corners and lively attractions. This range of choices is part of the appeal that Anne's Land holds, for families can spend all of a two-week vacation without straying far from this "centre of activity."

And just in the "centre of the centre" some of the best natural features of Anne's Land are encompassed in Prince Edward Island National Park, where miles of white sand beaches present a coastline of fragile beauty. The Park protects the strips of sand and delicate dunes, and offers extensive interpretive programs to explain to visitors the natural, cultural and historic landmarks found within the boundaries of the Park. That includes, of course, Green Gables where thousands come to see the home that inspired L.M. Montgomery to write the novel Anne of Green Gables about the red-haired orphan who captured the hearts of readers around the world. The modest farm home is just part of a site that also includes an extensive program to interpret Montgomery's time and the lifestyle of rural PEI in the early 1900s. Imagine the charm of a guided evening walk through the Haunted Wood often described by Montgomery in her novels.

Elsewhere in Anne's Land, visitors will find the landscape so lovingly depicted by Montgomery: rolling farm fields stretching down to the shore, red cliffs and tiny villages. Some of the most scenic areas of the Island are found along the Blue Heron Drive, and a Land Trust has been formed in the name of Montgomery to protect some of the pastoral vistas so typical of Prince Edward Island.

The community of Kensington has preserved the town's Train Station and railyard, where shopping, historic displays and a weekly farmers market are part of the attraction.

In North Rustico a new museum interprets the lobster fishery for visitors.

And don't forget golfing as Anne's Land provides choices from a grand total of eleven courses - and that's not counting mini-golf!

For families looking for action, Anne's Land has it in abundance! Water slides, adventure parks, deep-sea fishing and kayaking - this is not a place where you will ever hear the dreaded whine "I'm bored."